In this brief I introduce a new synthesizable VCO using (n+1) mux2i cells from the SkyWater130 PDK to form a (2n+1) hybrid ring oscillator.

The benefits of alternating current-starved and regular inverters in a ring oscillator have been observed for at least a decade [1] and carefully analyzed here: [2]. A key benefit is a consequence of the observation that propagation delay of a regular inverter is inversely proportional to VDD and is proportional to VDD for the current-starved inverter [3].

The SkyWater130 PDK has 7 factory, standard cell libraries with different performance tradeoffs. 6 of them provide a mux2i cell with a useful design for these purposes (High Speed, Medium Speed, Low Speed and Low Power, High Density and High Density Low Leakage). A separate inverter is provided for each multiplexed input. Their outputs are connected. The active inverter is chosen in digital applications by power switching the sources of its complementary transistors:

This employs an inverter from the "select" input.

The usual bias source for this kind of oscillator involves another configuration not obtainable with standard cells.

This was replaced with the synthesizable, inverting voltage follower made from two equally-sized inverters.

An alternative to using the mux2i cell with swapped bias inputs is to make one of the cells using the mux2 cell which adds an inverter to the same layout as a mux2i cell.

For the 7th Skywater130 High-Voltage library without a mux2i the same technique may be adapted using the positive and negative enable tristate buffers, einvp and einvn.

This standard cell oscillator will likely be slightly inferior to a custom layout in most parameters except design time and cost. It uses (10n +10) vs (6n+2) transistors or-in the case of the mux2 version-(10n+2) vs (6n+2), The additional transistors may have a role in slowing the oscillator down or reducing its frequency range. 1GHz was readily achieved in prelayout Spice simulations with the High Speed cells.

Voltage control can be observed in the following simulation output: 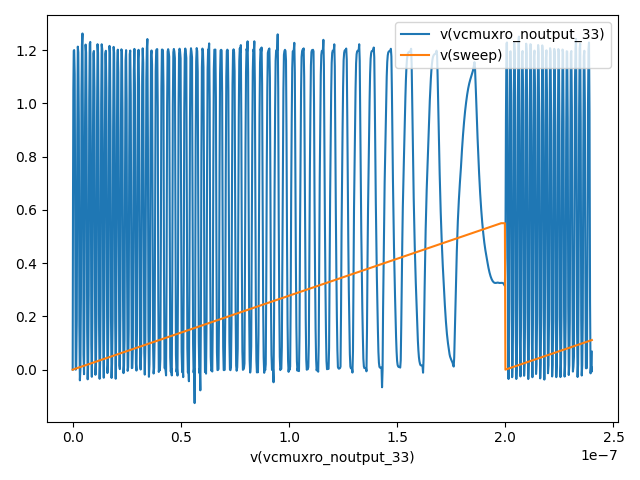 The inverting voltage follower bias generator may have higher current consumption than an optimized bias generator. However, since this new design can be synthesized so easily and implemented in multiple libraries on Skywater130, it may serve as a useful benchmark of those libraries.

It would be useful to design a benchmark comparison by following the basic layout in [4].